When it comes to building sets and props for movies and TV, it’s so easy to get science fiction wrong – particularly with low-budget productions. It must be tempting for the set department to fall back on the “get a bunch of stuff and paint it silver” model, which can make for a tedious experience for the technically savvy in the audience.

But low-budget does not necessarily mean low production values if the right people are involved. Take [Joel Hartlaub]’s recent work building sets for a crowdfunded sci-fi film called Infinitus. It’s a post-apocalyptic story that needed an underground bunker with a Fallout vibe to it, and [Joel] jumped at the chance to hack the sets together. Using mainly vintage electronic gear and foam insulation boards CNC-routed into convincing panels, he built nicely detailed control consoles for the bunker. A voice communicator was built from an old tube-type table radio case with some seven-segment displays, and the chassis of an old LCD projector made a convincing portable computer terminal. The nicest hack was for the control panel of the airlock door. That used an old TDD, or telecommunications device for the deaf. With a keyboard and a VFD display, it fit right into the feel of the set. But [Joel] went the extra mile to make it a practical piece, by recording the modulated tones from the acoustic coupler and playing them back, to make it look as if a message was coming in. The airlock door looks great too.

Like many hacks, it’s pretty impressive what you can accomplish with a deep junk pile and a little imagination. But if you’ve got a bigger budget and you need some computer displays created, we know just the person for the job.

[Matt] tipped us off to this one. Thanks!

Swarms of robotic insects incapable of being swatted away may no longer be the product of science fiction and Black Mirror episodes. A team from EPFL’s School of Engineering has developed an insect propelled at 3 cm/s, dubbed the DEAnsect.

What makes this robot unique is its exceptional robustness. Two versions of the robot were initially developed, one tethered with ultra-thin wires capable of being squashed with a shoe without impacting its functions and the second fully wireless and autonomous. The robot weighs less than 1 gram and is equipped with a microcontroller and photodiodes to recognize black and white patterns. 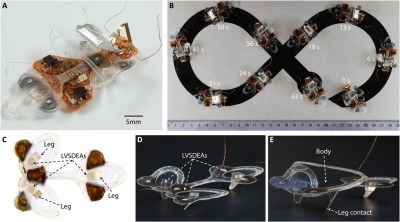 The insect is named for its dielectric elastomer actuators (DEAs), an artificial muscle that propels it with vibrations and enables it to move lightly and quickly.

The DEAs are made of an elastomer membrane wedged between soft electrodes that are attracted to each other when a voltage is applied, compressing the membrane. The membrane returns to its original shape when the voltage is turned off. Movement is generated by switching the voltage on and off over 400 times per second. The team reduced the thickness of the membranes and developed soft, highly conductive electrodes only several molecules thick using nanofabrication techniques. They plan on fitting even more sensors and emitters to allow the insects to communicate directly with one another for greater swarm-like activity.

Jessa Jones CORRECTS Apple on data recovery and gets BANNED!

If you’re going to fail, you might as well fail ambitiously. A complex project with a lot of subsystems has a greater chance of at least partial success, as well as providing valuable lessons in what not to do next time. At least that’s the lemonade [Josh Johnson] made from his lemon of a lost-cost vector network analyzer.

For the uninitiated, a VNA is a versatile test instrument for RF work that allows you to measure both the amplitude and the phase of a signal, and it can be used for everything from antenna and filter design to characterizing transmission lines. [Josh] decided to port a lot of functionality for his low-cost VNA to a host computer and concentrate on the various RF stages of the design. Unfortunately, [Josh] found the performance of the completed VNA to be wanting, especially in the phase measurement department. He has a complete analysis of the failure modes in his thesis, but the short story is poor filtering of harmonics from the local oscillator, unexpected behavior by the AD8302 chip at the heart of his design, and calibration issues. Confounding these issues was the time constraint; [Josh] might well have gotten the issues sorted out had the clock not run out on the school year.

After reading through [Josh]’s description of his project, which was a final-year project and part of his thesis, we feel like his rating of the build as a failure is a bit harsh. Ambitious, perhaps, but with a spate of low-cost VNAs coming on the market, we can see where he got the inspiration. We understand [Josh]’s disappointment, but there were a lot of wins here, from the excellent build quality to the top-notch documentation.

[Bwack] had some scanned pictures of an old Commodore card and wanted to recreate PC boards from it. It’s true that he could have just manually redrawn everything in a CAD package, but that’s tedious. Instead, he used SprintLayout 6.0 which allows you to import pictures and use them as a guide for recreating a PCB layout.

One might think the process could be more automated, but it looks as though every piece needs to be touched at least once, but it is still easier than just trying to eyeball everything together.

Most of the video is sped up, which makes it look as though he’s really fast. Your speed will be less, but it is still fairly quick to go from a scan to a reasonable layout.

The software is not free, but you can do something somewhat similar in KiCAD. The trick is to get the image scaled perfectly and convert it to a component on a user layer. Then you can add the new component and enable the user layer to see the image as you work. There’s even a repository of old boards recreated in KiCAD.

There are probably an infinite number of ways to attack this. An older version of SprintLayout helped with the Re-Amiga 1200.

By now most readers will be familiar with the Miniware TS100 and TS80 soldering irons, compact and lightweight temperature controlled soldering tools that have set a new standard at the lower-priced end of the decent soldering iron market. We know they have an STM32 processor, a USB interface, and an OLED display, and that there have been a variety of alternative firmwares produced for them.

Take a close look at the TS80, and you’ll find the element connector is rather familiar. It’s a 3.5 mm jack plug, something we’re more used to as an audio connector. Surely audio from a soldering iron would be crazy? Not if you are [Joric], who has created a music player firmware for the little USB-C iron. It’s hardly a tour de force of musical entertainment and it won’t pull away the audiophiles from their reference DACs, but it does at least produce a recognisable We Wish You A Merry Christmas as you’ll see from the video below the break.

Since the TS100 arrived a couple of years ago we’ve seen a variety of inventive firmware for it. You may remember [Joric]’s previous triumph of a Tetris game for the iron, but our favourite is probably the TS100 oscilloscope.

Thanks [cahbtexhuk] for the tip.

We hired a Japanese moving company!

In any normal situation, if you’d read an article that about building your own quantum computer, a fully understandable and natural reaction would be to call it clickbaity poppycock. But an event like the Chaos Communication Congress is anything but a normal situation, and you never know who will show up and what background they will come from. A case in point: security veteran [Yann Allain] who is in fact building his own quantum computer in his garage.

Starting with an introduction to quantum computing itself, and what makes it so powerful also in the context of security, [Yann] continues to tell about his journey of building a quantum computer on his own. His goal was to build a stable computer he could “easily” create by himself in his garage, which will work at room temperature, using trapped ion technology. After a few iterations, he eventually created a prototype with KiCad that he cut into an empty ceramic chip carrier with a hobbyist CNC router, which will survive when placed in a vacuum chamber. While he is still working on a DIY laser system, he feels confident to be on the right track, and his estimate is that his prototype will achieve 10-15 qubits with a single ion trap, aiming to chain several ion traps later on.

As quantum computing is often depicted as cryptography’s doomsday device, it’s of course of concern that someone might just build one in their garage, but in order to improve future cryptographic systems, it also requires to fully understand — also on a practical level — quantum computing itself. Whether you want to replicate one yourself, at a rough cost of “below 15k Euro so far” is of course a different story, but who knows, maybe [Yann] might become the Josef Prusa of quantum computers one day.